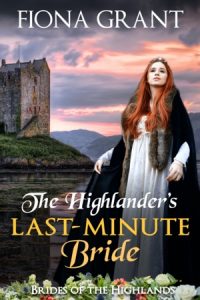 Jane MacKay has little choice: if she does not agree to wed lecherous old Laird Sutherland, her terrified younger sister Heather will be handed over to him in her stead.

Jane cannot allow that to happen. With a heavy heart, she leaves behind her home (and her dreams) and journeys to the Sutherland Keep to marry a man whose infamy has spread far and wide — a man who has already buried two wives.

At the pre-wedding dinner, she realizes that things are even worse than she fears. Her detestable husband-to-be clearly cannot wait to bend his young bride to his will — and his two sons appear to be cut from the same cloth.

But fate takes a hand, and although Jane rejoices, her father is aghast when he learns that the new alliance seems doomed. However, he is not one to give up easily, and Jane’s relief turns to grim resignation when she discovers the plan the two families have hatched. 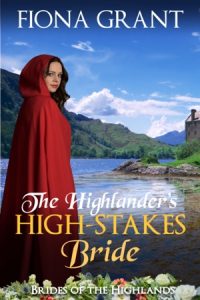 Gareth and Brodie Hay have a not-so-shiny reputation in the highlands: brothers born just a twelvemonth apart, they are famous for their carousing in the local tavern: sampling the ale, teasing the wenches, and remaining unbeaten in games of chance.

When their mother Anna Hay becomes seriously ill, their father insists that one of them must take a wife to help run the keep and tend to his precious Anna. Neither wants to give up their free and easy lifestyle — so they decide to let a throw of the dice determine who will be the unfortunate groom. But then, who will he marry?

The loser of the bet must choose from three young lasses presented by their eager families: Blair Menzies, Flora Forbes and Ailis Mackenzie.

Blair looks singularly unimpressed by both lads, but seems capable of looking after their mother. Flora is a charming flirt that promises any man a lively time — but can she run a keep? And Ailis, with her regal bearing and cool exterior, could handle any crisis…but will she be a willing partner in the marriage bed?

The ever-inventive Hay brothers come up with a solution that lands them in more hot water than they ever expected.

The lass who is chosen soon lets them know she is not one to meekly accept the role of a passive highlands wife, and leads her new husband a merry dance before summer returns to the Hay Keep! 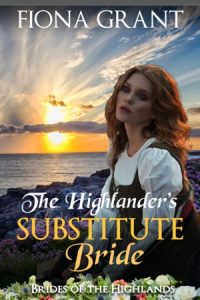 Crissa and Owena Macleod, auburn-haired twins who are impossible to tell apart, have always been close. As children, one of their favorite games was to pretend to be each other to confuse their family and friends.

Crissa thinks she may never recover from losing both her husband and her darling child, and spends her days quietly in the Maclean Keep — until one day her twin, Owena, comes to her begging for help.

Owena has fallen in love with a dashing young man who does mysterious work for the King. To her dismay, her father has arranged her betrothal to Kenrik Maclean. With tears in her eyes, Owena exerts all her wiles to persuade Crissa to take her place. Can she not remember what it was like to love someone so deeply? Surely she will do this for her sister? After all, she says, as a widow, Crissa can marry whomever she likes!

Crissa finally gives in, but although the wedding passes without the groom being any the wiser, neither twin could possibly have foreseen what their deception would lead to… 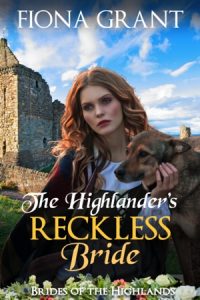 Owena Macleod, daughter of Laird Iain Macleod and twin sister to Crissa, has always yearned for an adventurous life. When her father arranges her betrothal to Laird Kenrik Maclean, she cannot bear the thought of such a constrained life — especially now that she has fallen in love with a brave and dashing King’s spy!

She pleads with her sister Crissa to take her place in the nuptials, pretending to be Owena. Crissa finally gives in, and Owena takes her name and slips away to marry her spy, breathlessly anticipating a life of adventure.

Barely two months into her marriage, she realizes that her husband is not the man she thought. Her hopes and dreams have turned to ashes. But Owena was never the kind of lass to sit back and accept what life throws at her, so she decides to follow her husband when he sets off on a mission. She will either reform him, she vows, or leave him and find the kind of life she wants!

Before the sun has set on the first day, Owena finds herself in a world of trouble. Who is this hard-eyed man who has been following both Owena and her husband? And what does he have in mind for Owena?

Owena discovers that it is far from easy to navigate the treacherous waters inhabited by spies and traitors, all the while remembering that she is supposed to be her sister Crissa! 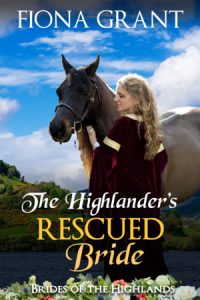 Anice Gordon has been a sore trial to her parents from the day she was born. Headstrong, impulsive and forever in trouble, she is a lass who seemed to attract disaster.

Robert Ogilvy, her brother Donal’s best friend, grew up having to rescue Anice from one mishap after another. He is fond of his friend’s wee sister, and often enough amused by her pranks — until her twelfth summer, when his father and Anice’s decide it would benefit the clan if the two of them were to be betrothed. They announce it at her brother Donal’s birthday celebrations, expecting his good friend Robert to be pleased.

Aghast, Robert finds it hard to hide his dismay. Wee Anice? This tearaway lass with a bawdy sense of humor and stick-straight tangled straw hair? How could he think about her as a wife and Lady of the Keep? Hellfire, she is more like a sister to him!

Nevertheless, three years later, on Anice’s fifteenth birthday, they are wed. Robert, at his wits’ end with his impulsive wife, secretly enlists the help of the servants to keep her out of trouble.

But what happens when Anice, willful and proud and now a woman grown, finds out about his plan? The cold Scottish hills near melt with the fury of her anger!